To be grateful- Is Hard (On a different light) I am a very very private person by nature and for the longest time, F has been convincing me to start writing/ blogging because she knew from the start that I was a frustrated writer as well. I’ve been blogging ever since late high school. And pretty sure I have at least a dozen of identities on different blog sites like Live Journal, Xanga, Blogspot and even Multiply in my early days. I was (still am) always fond of writing stuff and the anonymity that comes with it. But most of my posts were full of negative vibes, some stuff I was going thru that no one knew about and some stories I wanted to publish one day (or like never). Most of the stuff I wrote about was pretty dark. Bottom line, the old me didn’t know how to be grateful

With that being said, this would be my first time to actually be a bit more open with who I am, who I have become especially ever since I’ve met F.

So on with being grateful…

Between the two of us, F has always been the “optimistic-ray-of-sunshine” dreamer that she is. I was the “prepared-for-disaster-pessimistic” grumpy cat. Back in 2013, F wanted to do something more in life. She felt stuck with our lives on the shifting schedules of the corporate world. She wanted to travel, to see a different way of life. The boring me on the other hand was doing just fine and hated the idea of traveling, let alone living abroad. But somehow she convinced me to go with her and so, we went off with her sister to Dubai.

People say once you land a job, life would then be easy. Financially, I guess. Out of our comfort zones, we basically just relied on each other and eventually, we adjusted to the life we had. We go to work on weekdays and went out on weekends, it didn’t last long because both of us enjoyed quiet moments together and are more of a home buddy kind of people so we moved to a less crowded place and stayed home more often on weekends. We bought stuff we didn’t really need but buying, slowly lost its appeal to us. Because of that, we saved enough to go to places, I was happy to see F fulfill her dreams of traveling and seeing how other people live their lives. And for my end, I was just happy to see her happy. Not a lot of people know that F just doesn’t travel for the sake of bragging or just to see places. She loves to travel to see the places & people, know how they live their lives and learn from them. Her compassion shines thru wherever we go. I was just happy to see her dreams realize before her eyes, and so I thought…

Being thrifty, I earned enough for me to be able to bring my whole family to Dubai for vacation. And then it hit me, those moments of having meals together as a family, doing nothing but talk to each other, playing pool and video games together, stuck with me. I realized what I really wanted was to have those kind of moments with family and friends. Moments that are so simple it’s almost boring, moments that we connect to people instead of posting it. I was never really driven by money or material things (and no, we are not rich!).

And that’s where my usual old self kicked in again, A whole paragraph can’t sum up all the hardship/ feelings I had, but this was what I was going thru: I was upset/depressed and feeling empty for nothing and everything, all at once. Started to become more aloof to people and hated my job, I would go to work feeling okay and feeling miserable the next day. Talking to people literally stopped for me. Was hating myself for being tempted of wanting more material things because money was easy and I can easily buy it. I hated that I didn’t have a quiet place to go and pray because it’s always crowded in the church. I practically hated everything and everyone for no reason and I wanted to go home, that was my ordeal.

Talked to F about to try to turn the situation around (but for the most part, I was worried that I was going insane). I started to be inactive on social media, stopped reading bad news and hung out with more positive and happy people. It helped, but didn’t make it better. I can remember F saying, “I should be grateful but she can say whatever I need to hear  but its only me who can help me”.  It felt like me, being such a “ray of sunshine” that I am (sarcasm), was already affecting her because she was also going thru some heavy stuff at work and personally. I was thinking she is getting tired of babysitting me and my feelings.

So I decided to keep things to myself, I tried to be positive. I started to go out for quick walks during my lunch break, talk to people and strangers (like actual conversation and not small talks) and started to look for another job. I told myself that I have to suck it up and that if we will go home, we’ll go home in our own terms. Not because I was too “fragile” to stay and emotionally driven than being objective.

It worked for a while and found myself on a constant cycle of winning and losing from whatever I was going thru. F’s 30th birthday was coming up, F convinced me to go on a vacation for a change of scene, so I said yes. Dubai, being geographically located in the middle of the map, makes it easier (and cheaper) for us to go to places which allowed us to celebrate F’s birthday in Maldives. There, we met two Filipino guys also on vacation (Dan & Mark). Since we all availed the same tour packages and hotel (and being the only Pinoys around) we ended up hanging out almost every time in between tour activities.  On one of those occasions, we started to talk about things, life, hardships and all that. (It was “refreshing” to have a deep conversation with people since I haven’t had any for a while except with F. Wait that sounds wrong, I mean having meaningful conversations). Within those conversation Mark brought up a book that had something to do with looking at things in a different perspective. To be grateful. Long story short, when we got back to Dubai, F bought the book. At first I thought it was really silly that she bought it and especially after I read the first few pages because I was more like an exercise book asking you to do things. I was really skeptical because there was no secret about it and it was so simple. But I did it anyways because I like to read and I was still trying not to spend so much time online. Halfway thru the book I was still not convinced with it but I noticed things have become a little bit more bearable. The gist of the book is that you have to be thankful to God or the universe or to whoever with practically anything worth thanking for. Few months later after coming back from vacation, I had a more sound and peaceful mind. Few months after that, we both decided to go back home because we both want to and we were ready. It wasn’t all because of the book, I think it was more of the ripple effects of God’s plan for us to go abroad and learning a thing or two. To F wanting to go for a vacation and meeting strangers.

I chose to be grateful to God (it’s a personal choice because I believe in Him) But I must admit, up to now I still think some of the stuff on the book is really lame. And I still feel empty; wanting every now and then and I think it won’t go away but I have come into terms with my demons and found a place we can co-exist. But I now know there are more things to be thankful for.

Somehow, I realize, it can only take one simple unfortunate event (like your pen falling out of your hands just when you need to write something important) for a person to break but it can also take one simple act (like a harmless “yes” or a smile from someone) can turn it around.

“His timing will always be perfect, even when our trust in it is not”

That’s why we are “The Grateful Possums” 🙂 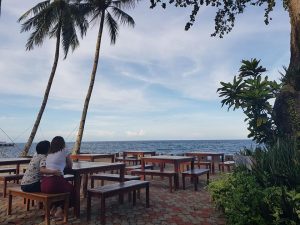 If you need someone to talk to I am here, we are here. Even if you are a stranger.. we don’t even have to know each other. You can contact us (me) at: [email protected]

(my only request, please put the words “different light” on the subject so I can easily see it)